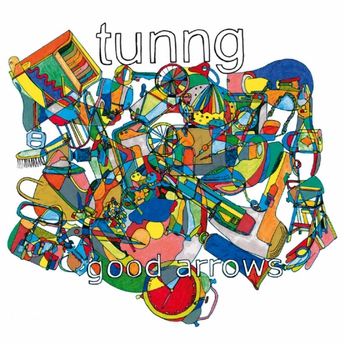 "Despite their digital genesis, Tunng's previous two albums eased into the affections of the neo-folk fraternity thanks to founders Mike Lindsay and Sam Genders' facility for plucking and strumming. Now a sextet, they make merry with arcane dulcimers and steel-strung harps, yet Good Arrows is principally an accessible modern pop record. Opener 'Take' pitches massed vocals against flickering beats and handclaps, like The Watersons getting it on with The Beta Band, while 'Bricks' arrives in a flurry of slide guitar and electronic scree before finding a jaunty Moog and acoustic guitar chug to support a sing-song melody and opaque lyrics that conflate fairytale allusion and the titular building blocks. An album that values discreet whimsy over Wicker Man portent, it succeeds on its own puckish terms. David Sheppard.