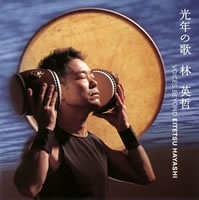 "Taiko drumming groups of varying quality have now sprung up in many countries around the world. Contrary to popular conception, groups of taiko drummers in loin cloths is not some ancient Japanese tradition. One man, more responsible than any other, for creating this so-called 'tradition' is Eitetsu Hayashi, the best musician in the original Ondekoza, lead drummer with their off-shoot Kodo and for many years now, a solo musician. Unlike some of the groups he helped spawn, Hayashi is not style over substance, instead he continues to push the boundaries of taiko music with collaborations and innovations as well as being just about the best of the taiko players. On this album he is joined by a chorus group and guest vocalists and tackles some Middle Eastern rhythms and songs written by one time collaborator, the late Hamza El Din." (www.farsidemusic.com)