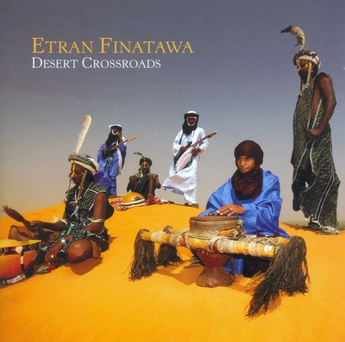 "This band should appeal to any followers of Tinariwen in need of a new blast of the desert blues - if with a slightly lighter but less sophisticated edge. Etran Finatawa are another group of nomads from the Sahara, but are based in Niger, across the border from Mali, and include members of the Wodaabe people along with the Tuareg musicians. There are sections where the rolling, stuttering electric guitar work inevitably echoes Tinariwen, though without quite the same exhilarating drive, but then they break away to explore a more gentle, individual approach. The best songs, like the sturdy and cheerfully melodic Asistan, mix acoustic guitar, chanting and hand drums; elsewhere, their lead singer and guitarist, Ghalitane Khamidoune, demonstrates his harsh-edged solo vocal work on tracks that sound like field recordings made in the wilds of the Sahara, rather than in a London studio. The thoughtful lyrics express the band's fears that the nomadic desert lifestyle is under threat." (Robin Denselow, www.guardian.co.uk)